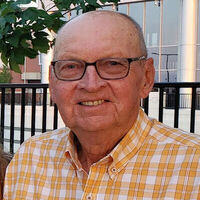 Lyle Gordon Jacobson, age 79, of Lake Washington, passed away on Dec. 15, 2020, at Mayo Clinic Health Systems, due to complications from a long-term lung condition.

A Celebration of Remembrance Reception will be held on Sunday October 3, 2021 from 1 - 4 p.m., at the Mankato Golf Club. (A small visitation was also held last December).

Lyle was born on Mother's Day, May 9, 1941, in Duluth, MN. He graduated in 1959 from Duluth East High School. He attended college at the University of Minnesota Duluth for two years, then graduated from the University of Minnesota in Minneapolis in 1963, with a degree in Aeronautical Engineering. In 1965, he received a Master's Degree from the University of Minnesota in Mechanics and Materials. He was united in marriage to Kay (Jones) Jacobson on June 19, 1965, at the First Presbyterian Church of Mankato. For the next 13 years, Kay and Lyle made their home in Rochester, MN, where Lyle worked at IBM from 1965-1978. The couple and their 3 children then moved to Mankato, where Lyle began work at Katolight Corporation. Lyle ultimately became President and CEO of Katolight (now MTU/Onsite Energy Corp.), until the company was sold in 2007. Under Lyle's management, the company grew from 50 employees to 350. Lyle served on numerous boards and committees, including the Hickory Tech Board of Directors, and the Minnesota State University Mankato Foundation. He also served as president of the Rochester West Kiwanis Club, and was recently honored for 50 years of membership by the Kiwanis Club of Mankato Downtown. He was part of the advisory board that initiated the Children's Museum of Southern Minnesota. Lyle belonged to Presbyterian Churches in both Rochester and Mankato. He has been a church Elder, as well as serving on various committees. Lyle and Kay enjoyed spending time and entertaining family and friends at their winter home in La Quinta, CA. He was an avid golfer and fisherman, and he especially enjoyed golfing and fishing trips with longtime friends; plus, various lunch and coffee groups, and spending time with his grandchildren at Ruttger's Bay Lake Lodge in Deerwood, MN, and at Lake Washington.

To order memorial trees or send flowers to the family in memory of Lyle Gordon Jacobson, please visit our flower store.