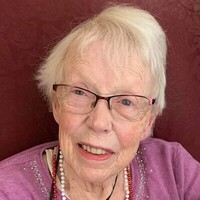 Mabel was born on February 12, 1931 to Albert and Emma (Froemming) Peterson in Forest Lake, Minnesota.  She grew up on the family farm.  After high school she attended Nebraska Christian College in Norfolk, Nebraska for two years. She then moved to Fargo, North Dakota and lived with her sister, Dorothy, and her brother-in-law, Clyde.  While living in Fargo she met Robert (Bob) Potter and they were married on June 6, 1958.  They had two children, Cheryl and Darrel, who died from muscular dystrophy in 1978.  Mabel and Bob lived in Fargo until they moved to the Mankato area in 2013 to be near Cheryl and her family.  They were faithful members of Valley Christian Church in Moorhead, Minnesota for over 50 years.

Mabel loved being around people and staying busy.  She worked at many different jobs over the years.  She was a beautician, daycare provider, bakery worker, and she worked in Environmental Services at Dakota Hospital in Fargo for over 20 years.  After she retired she kept busy working part-time.  She especially enjoyed being a part of the Foster Grandparent Program in Fargo.

Mabel enjoyed reading, search-a-word puzzles, jigsaw puzzles, and watching Wheel-of-Fortune every night with Bob.  She also enjoyed cooking holiday dinners and baking Christmas treats.  Mabel and Cheryl liked to go shopping together and were always looking for a good deal.  Mabel deeply loved Bob, her family, and her Lord.

A memorial service will be held at a later date at Sunset Memorial Gardens in Fargo, North Dakota.  Mabel will be laid to rest next to her husband, Bob, and her son, Darrel.

The family would like to thank Hillcrest Rehabilitation Center and Mayo Clinic Hospice for the wonderful care and support Mabel received while living at Hillcrest.

To order memorial trees or send flowers to the family in memory of Mabel Ann Potter, please visit our flower store.