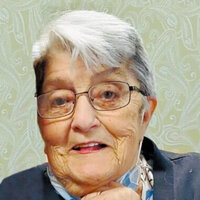 Marcella was born on March 1, 1935 in Lake Crystal, MN to Donald and Dorothy (Lewis) Heiser.  She graduated from Mankato High in 1953.  Marcella was united in marriage to Richard Pomerenke on June 9, 1954.  He died in 1981.  She then married Donald Black on September 27, 1986 and he died in 1995.  She operated a home daycare in St. Louis Park for five years and then worked at the Mankato Lutheran Home.  Marcella enjoyed cooking, baking, gardening, and playing bingo.  She loved attending her grandchildren and great-grandchildren’s sporting events and school programs.

To order memorial trees or send flowers to the family in memory of Marcella J. (Pomerenke) Black, please visit our flower store.