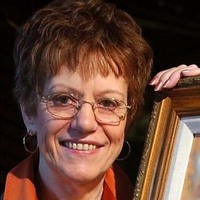 Marian Anderson was born to Elvin & Rose (Fischer) Spiess on November 5, 1936 at Nicollet, MN and lived on the shores of Swan Lake.  Later the family moved to rural Madelia where she graduated from Madelia High School.  Marian’s art has taken her from coast to coast, to Alaska, to Europe, as well as Africa; but the Mankato area always remained her home.  She received many prominent awards such as Artist of the Year in 1991 at the Midwest’s Wildlife and Western Art Show held in Minneapolis, MN, received a commission to do the National Wildlife turkey stamp as well as paintings for Pheasants Forever, Ducks Unlimited, Boy Scouts of America and other similar organizations.

Marian Anderson oil paintings are diversified in subject so exquisite in their detail that they border on photographic reality.  With each brush stroke, a breath of life set her art apart, reflecting her love for life and nature.  With a lifetime of experience and perseverance as an artist, Marian defied the starving artist’s stereo type by becoming a very successful entrepreneur.  One of Marian’s most gratifying quotes given by an art collector was “Marian captures the spirit and then sets it free”.

Marian was preceded in death by her parents; husband Venes (Vince) Meyer who passed away in 2005; and nephew, Martin Dawson.  Marian is survived by her sister, Esther Baity; niece, Vernajean Dawson; and special loving friend, James W. Peterson.

A celebration of Marian’s life and work will be held later in the year.

Memorials may be directed to the Marian Anderson Fund at the Mankato Area Foundation or the Blue Earth County Historical Society. Arrangements by Mankato Mortuary.

To order memorial trees or send flowers to the family in memory of Marian Anderson, please visit our flower store.