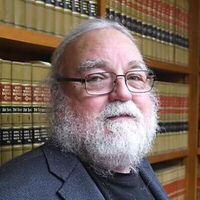 A Celebration of Life will be held at a later date in the spring.

Mark was born July 27, 1951 in St. Peter, Minnesota to Clarence and Florence Halverson. He graduated from St. Peter High School in 1969. He completed his bachelor’s degree at Mankato State University in 1973 and received his law degree from Hamline University School of Law in 1980. Following his education, Mark practiced law in Mankato until his death. He was a founder and attorney for the Save the Kasota Prairie Organization in which he helped establish in his early years as an attorney.

During his summers in law school, Mark worked on the Alaskan railroad. He loved all trains which was a passion that continued throughout his life. Later in life, Mark volunteered as a trainman for the Osceola and St. Croix Valley Railway. Mark was also a beer and baseball enthusiast. For many years he was a season ticket holder for the Mankato Moondogs and Minnesota Twins. He especially loved Twins spring training in Florida.

Mark will be remembered as a blues music lover. He was a DJ on KMSU in which he hosted his own show, Blues Before Monday. He also sat on the Minnesota Blues Society Board. He took any and every chance to attend live music events.

Mark was also passionate about politics. He was a strong supporter of the Minnesota DFL party and served as the chairman of the Blue Earth County DFL.

Most importantly, Mark did everything he could to help others. If you were fortunate enough to be his friend, Mark was loyal and always there for anyone who needed him. He was a true friend.

Mark is survived by his wife, Roylene Champeaux; stepdaughter, Anne (Drew Pinney) Hartman of Santa Cruz, California; grandchildren, Nick and Cameron; brother, Dean Halverson of Kasota; and all of his many loving friends.

Mark was preceded in death by his parents.

To order memorial trees or send flowers to the family in memory of Mark Halverson, please visit our flower store.