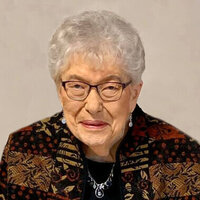 Memorial service will be held at 2 p.m. on Wednesday, October 6, 2021 at Christ the King Lutheran Church in Mankato. Visitation will be held for one hour prior to the service at the church. Interment will be at Glenwood Cemetery in Mankato.

Marlys Dehn was born on February 20, 1930 in Westbrook, MN to Herman and Alma (Dehn) Grams. She was baptized and confirmed at the Rosehill Evangelical Lutheran Church in Rosehill Township, Westbrook, MN. She attended District 48 country grade school and graduated from Westbrook High School in 1948. Marlys was united in marriage to Lyle Jorgenson on September 15, 1951 at Rosehill Emmanuel Lutheran Church. She worked for the local Produce and at the Schmidt Memorial Hospital. She and her family moved to Mankato, MN in 1959. Marlys worked at Immanuel Hospital, Bretts Department Store, in the office at Christ the King Lutheran Church for 13 years, Gus Johnson Plaza, Wilbur Lieske Accounting, and worked and volunteered for VINE Faith and Action. Marlys did baby sitting for 6 years in her home. She loved children and so enjoyed caring for them.

Marlys and her family were charter members of Christ the King Lutheran Church. She enjoyed watching the building of Christ the King, which was built just down the street from their home. Marlys served on many committees at Christ the King; she served at the first chairperson for the Church Women, she taught Sunday School and served as Superintendent of Sunday School for a number of years, was a member of the Altar Guild, served for many years as the coordinate for family fellowships following funerals; attended Bethel Bible studies and Bible Study Fellowship for 11 years.

Marlys was a caregiver for many years for her son, Larry, who had Cerebral Palsy and her husband, Lyle, who became disabled. She enjoyed her flower garden and was a member of the Mankato Garden Club. Marlys and Lyle enjoyed sitting in the swing on the patio enjoying the flowers and watching the birds, going camping with her family, and square dancing. They belonged to the Circle Eight Square Dance Club of Mankato and they also traveled to Canada to dance with their square dance friends there. One of her highlights was when she was asked to be a Queen Candidate of the Mankato Bend of the River Days.

Marlys is survived by daughters, Marilyn Hagge of Mankato and Nancy and Steve Clarke of Silver Bay, Minnesota; sister, Caryol Einertson of Windom; nieces and nephews and many friends.

She was preceded in death by her parents, Herman and Alma Grams; husband, Lyle; son, Larry; son-in-law, Gary Hagge; and sister, Audrey Slingsby.

Memorial gifts may be directed to Christ the King Lutheran Church or VINE Faith and Action.

To order memorial trees or send flowers to the family in memory of Marlys Dehn Jorgenson, please visit our flower store.