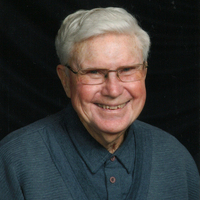 Memorial Service 11:00 a.m., Friday, October 8, 2021 at Christ the King Lutheran Church, Mankato. Visitation will be one hour before service at the church. Interment will be in Woodland Hills Memorial Park, Mankato. Mankato Mortuary is in charge of arrangements.

Marvin was born on September 16, 1931 in Fairmont Township to Archie and Lauretta (Dehnert) Dundas. He grew up in Fairmont and graduated from Fairmont High School in 1950. Marvin was drafted into the Army in 1952 and served in Korea. He was honorably discharged in 1953.

Marvin married Marilyn Wick in 1954 in North Mankato. They were married for 67 years. Marvin and his family were charter members of Christ the King Lutheran Church. He worked for Dunlop Meat Products for 41 years. He played guitar and sang with local dance bands. Marv and Marilyn later enjoyed camping on the weekends. Above all, he loved his family and spending time with his kids, grandkids, and great grandkids. Marvin was known for his big smile and sense of humor. Even while bedridden, he entertained people with his quick wit.

He was preceded in death by his parents; five brothers; two sisters; and his beloved great granddaughter, Adelia.

Condolences may be left on Marvin’s online guest book at www.mankatomortuary.com

To order memorial trees or send flowers to the family in memory of Marvin D. Dundas, please visit our flower store.