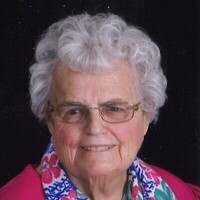 A Memorial Mass will be held at a future date to be announced. Family interment will be in Calvary Cemetery, Mankato. Mankato Mortuary is in charge of arrangements. In lieu of flowers, memorials may be given to St. John the Baptist Catholic Church. Condolences for Mildred’s family can be left at www.mankatomortuary.com

Mildred was born September 18, 1921 to Emmett P. and Esther E. (Lang) McGonagle in Waseca, MN. She graduated from Sacred Heart High School, Waseca in 1939. She was united in marriage to Raymond J. Jewison on June 4, 1942. Mildred was a nurse’s aid at Good Counsel for many years. She was a member of St. John the Baptist Catholic Church, Holy Family Catholic Aid, Catholic Daughters, and the Summit Center as a volunteer. She enjoyed getting together with her family for holidays and picnics at the lake. She also liked to play cards at the Summit Center.

Mildred was preceded in death by her parents; husband, Raymond on May 12, 1969; son-in-law, Russell Fowler.

To order memorial trees or send flowers to the family in memory of Mildred Marie Jewison, please visit our flower store.