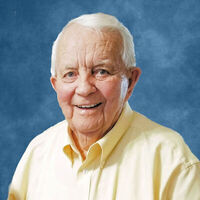 Norman Arthur Madson, Jr., of North Mankato, MN, passed peacefully from earthly life to his eternal home in heaven at 9:45 a.m. on Saturday, April 30, 2022. His funeral will be held at Peace Lutheran Church in North Mankato on Saturday, May 7, 2022 at 11 a.m. Visitation will be held at the church from 9 to 11 a.m. on Saturday. Interment will be at Norseland Lutheran Cemetery in St. Peter. The service will be livestreamed and available on Norman’s obituary page at www.mankatomortuary.com.

Norman was born in Princeton, MN, on January 15, 1932, to Norman Madson, Sr., and Elsie (Haakenson) Madson. He was baptized into the Christian faith on February 7, 1932, and confirmed in his Christian faith on June 24, 1946, at Our Savior’s Lutheran Church by his father.

Norman attended Lutheran schools for the entirety of his formal education, eventually graduating from Bethany Lutheran Theological Seminary in 1957.

During Norman’s active parish ministry, he served multiple congregations in Minnesota and Wisconsin. After Norman retired from the parish ministry, he and Amanda moved to North Mankato, MN, where they became members of Peace Lutheran Church. Not one to sit around after his retirement, Norman continued to serve the Lord in a variety of mission fields all over the world, including Bulgaria and South Korea.

Our dad’s entire life was defined by his dedicated service to the Lord, his faithfulness as a husband, his role as a loving father, grandfather, great-grandfather, brother and friend to many. Growing up as pastor’s kids had its challenges, but the advantages outweighed those challenges. We grew up in a stable household filled with love, laughter, resourcefulness, generosity and common-sense rules based on the 10 Commandments. We knew that if we did wrong, we would be chastised with love. We knew that we would be forgiven and that bygones would be bygones.

The parishes that dad served when we were younger thrived under dad’s leadership. Many of his parishioners were farmers, and he related well to all of them. This was never made clearer than on the days when dad would say farewell to a church. To see those stoic farmers crying in the pews as he said goodbye was honest testimony of their love and respect for him.

He also loved kids and nothing made him happier than being all-time pitcher for softball games during Vacation Bible School or pick-up games in the neighborhood. “Hustle in! Hustle out!” he’d yell between each inning.

To say that dad was an avid sports fan might be the understatement of the century. He faithfully followed his beloved Minnesota sports teams through winning seasons and losing seasons. Losing seasons seemed to prevail, but that didn’t matter. He rarely missed a Vikings, Gophers, Twins or Timberwolves game.

When we children were involved in sports, he crisscrossed the states of Wisconsin and Minnesota to watch our games. He would sit in the stands with one hand on his knee and cheer for the good guys. The thought of berating an official over a bad call never crossed his mind.

Norman was preceded in death by his parents, sisters Gudrun, Naomi and Vivian, brothers Juul and Paul, wife Amanda and daughter Rebecca.

Norman lived his life in full knowledge of, and full confidence in, that word of the Apostle Paul which says, “For it is by grace you have been saved, through faith—and this is not from yourselves, it is the gift of God— not by works, so that no one can boast.” (Ephesians 2:8-9)

Blessed be his memory, and may God rest his soul.

The livestream link below is a complimentary service provided by Mankato Area Funeral Homes.

Unforeseen technical, internet, facility, and/or acoustical circumstances may produce a diminished end product. Please note, if the livestream does not appear, we are attempting to record and publish the service for later viewing.

To order memorial trees or send flowers to the family in memory of Norman A. Madson, please visit our flower store.