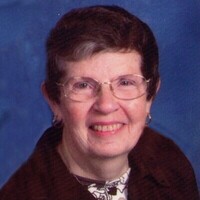 Patricia Ann Morrow died at her rural Mapleton home at the age of 89 years.

Memorial Mass 11:00 a.m. Tuesday at St. Teresa Catholic Church of Mapleton with one hour of visitation prior to the service. Immediately following the service, there will be additional time to visit and share memories before the burial at Calvary Cemetery in Mankato. Memorials are preferred to the American Cancer Society. Arrangements with Olson-Tichenor Funeral Home.

Patricia was born August 27, 1931 in Mankato to Paul and Loretta (Syndergaard) Hilgers. She attended and graduated from Loyola High School, received her nursing education from Immanuel-St. Joseph Hospital, and began her nursing career in 1950.

On September 30, 1952, Patricia married David J. Morrow at Ss Peter and Paul parish rectory in Mankato. They set up housekeeping in Portsmouth, New Hampshire, where Patricia worked in the hospital. After David was honorably discharged from the US Navy in 1954, they returned to Mapleton, raised four children and farmed in the area. Patricia started working for Dr. John Lester in 1963 and retired in 1997.

Patricia was a longtime and active member of St. Teresa Catholic Church. She spent many hours researching genealogy, sewed and did counted cross stitch. Patricia's garden consisted of apples and a variety of vegetables, which she shared with the local health care center and many friends and family.

To order memorial trees or send flowers to the family in memory of Patricia Ann Morrow, please visit our flower store.