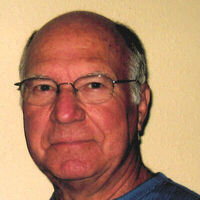 Mass will be 11am, Saturday, June 26, 2021 at St. John the Baptist Catholic Church in Mankato with visitation one hour prior. Burial will take place later at Fort Snelling National Cemetery in Minneapolis. Livestreaming will be available at https://www.youtube.com/results?search_query=stjohnsmankato

Paul was born on December 13, 1936 to Eugene and Elsie (Hager) Phillips in Blue Earth County.  He graduated from St. Clair High School in 1954.  In December 1954, Paul joined the U.S. Air Force.  After completing schooling at Lowry AFB in Denver, CO, he was assigned to Chitose AFB in Hokaido, Japan for two years.  Paul was released from active duty in 1958.  He was a member of American Legion Post #11 in Mankato.

On October 5, 1959, Paul married Joann (“Joan”) O’Herin at Immaculate Conception Church in St. Clair, MN.  Paul was employed by Northern States Power Company from 1961 until he retired in 1994.  Paul and Joan made their home in various locations through the years, spending 12 years in Mankato, followed by 10 years in Eau Claire, WI and 11 years in the Twin Cities area.  After retiring, Paul and Joan moved back to the Mankato area for five years.  In 2000, they moved to the Sun City Grand retirement community in Surprise, AZ before moving back to Mankato in 2007.

Paul and his wife were active members of Holy Rosary and later St. John the Baptist Catholic Churches for several years.  He enjoyed fishing, hunting, golf, bowling, travel, volunteering and most importantly, spending time with family.

Paul was preceded in death by his parents; and brothers-in-law, Don Varpness, John Germo, and Leroy (“Pete”) Wolff.

For those who wish to make memorial contributions in his honor, the family suggests the Heart Foundation, Catholic Charities, or St. John the Baptist Catholic Church.

To order memorial trees or send flowers to the family in memory of Paul Joseph Phillips, please visit our flower store.