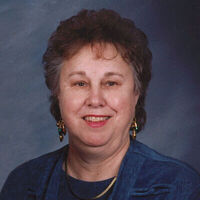 Phyllis Marie Groehler, 85, of Mankato went to be with the Lord and her beloved Marv on December 23, 2021, at Guardian Angels Care Center in Elk River, MN after suffering complications from a stroke in August.

Funeral service will be held at 1 p.m. on Thursday, December 30, 2021 at Hosanna Lutheran Church in Mankato. Visitation will be held from 11 a.m. to 1 p.m. Private family interment will be at Glenwood Cemetery. Mankato Mortuary is assisting the family with arrangements. Livestreaming of the service will be available at:

Phyllis Marie (Hoffman) Groehler was born February 5, 1936, to Alvin and Ramona (Mauer) Hoffman in Parshall, ND. She was the oldest of five children. There she met Marvin Groehler the love of her life, and married him June 27, 1953. Shortly after, they moved to Mankato where they owned Marv’s Garage and raised three children: Vicki (Brad) Halliday - Schultz of Pequot Lakes; Mark Groehler of Minneapolis; and Brett Groehler of Duluth. They were also blessed with three grandchildren, Katie (Jeremy) Halliday-James, Kaira Groehler, and Tanner Groehler. Phyllis had one great grandchild, Liam James; she called him her “Little Boy Blue” who was the sparkle in her eyes.

Family was the focus of Phyllis’ life; she was involved in and supported her kids’ activities even into their adult years. She looked forward to camping, boating, snowmobiling with family and friends. She also dedicated her time to her church, Hosanna Lutheran in Mankato, volunteering, and the Red Hat Society. She was known as the “Diamond Diva” to her friends in the Red Hot Hattitudes local chapter. Through the years she was active in various civic organizations, Vine, Hilltop Neighbors, Boy Scouts, Campfire Girls, and PTA. Phyllis was especially proud of their almost 50 years of marriage to Marv until his death in 2002.

Phyllis is survived by her three children and their families; brother, Robert (Kathleen) Hoffman, many nieces, nephews, and friends. She was preceded in death by her husband, Marv; her parents; sisters, Eldora Carlson and Jeanette Bonsall; brother, Al (Buddy) Hoffman; and son-in-law, Charles Halliday.

To order memorial trees or send flowers to the family in memory of Phyllis M. Groehler, please visit our flower store.