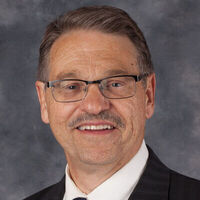 Rev. John Arthur Moldstad Jr., 66, of Madison Lake, MN, was called to his Heavenly Home unexpectedly on Friday, January 29, 2021. He died with the sure hope of eternal life through his Savior Jesus Christ, who promised, “I am the resurrection and the life. Whoever believes in me will live, even if he dies.” (John 11:25)

He was born April 6, 1954, in Bagley, MN, to Rev. John, Sr. and Gudrun (Madson) Moldstad. He was baptized the same day by his father in the hospital and was confirmed at Mount Olive Lutheran Church in Mankato.

John married his high school sweetheart, Joslyn, on July 30th, 1977. Their union was blessed with seven children and fourteen grandchildren. He and Joslyn recently moved to their new home on Lake Washington, where they planned to retire. They enjoyed many wonderful memories with their children and grandchildren at the lake.

John was an active member of Peace Lutheran Church in North Mankato, where a funeral service will be held at 11:00 a.m. on Saturday, February 6, 2021. The committal will immediately follow at Norseland Lutheran Cemetery in St. Peter, MN. Visitations will be held at Peace Lutheran Church on Friday, February 5 from 4 to 7 p.m. and on Saturday, February 6 from 9:30 to 10:30 a.m. The service will be live-streamed and can be viewed at www.peacemankato.com. Northview-North Mankato Mortuary is assisting the family.

To order memorial trees or send flowers to the family in memory of Rev. John Moldstad, please visit our flower store.