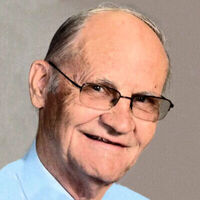 Funeral Mass will be held at 11:00 a.m. Tuesday, May 25, 2021 at Holy Family Catholic Church in Lake Crystal. Burial will be at Riverside Cemetery in Black River Falls, Wisconsin. Visitation will be held from 4 – 7 p.m., Monday at Lake Crystal Mortuary and one hour before the service on Tuesday at the Church. In lieu of flowers memorials may be given to Mayo Clinic Hospice or the Echo Food Shelve.

Ron was born September 21, 1938 in Menomonie, Wisconsin to Howard and Vera (Janke) Held.

He graduated from Black River Falls, WI High School and after that entered the Air Force serving his country for 4 years, 2 of which he spent stationed in Japan.  After his honorable discharge, he began working at Midland Cooperatives where he continued as a General Manager in several locations until his retirement in 2000.  On September 1, 1962 he married his wife, Sandy Brown, and they had three sons Mark, Scott and Steven.

Ron was actively involved in his community.  He was a member of Holy Family Catholic church since 1977, a member of Ducks Unlimited, the Cooperative Managers Association, Lake Crystal Economic Development Authority, Lake Crystal Area Recreation Board, the Chamber of Commerce and the Lake Crystal Lions Club where he served as President in 1992.

Raised on a farm, Ron was always a farmer at heart.  He was able to fulfill this passion as the General Manager of several Cooperatives.  The cooperative business never left him even after retirement, as he would spend time grading the Co-op road and playing cards there.  Also in retirement, Ron’s C-store coffee friends were an important part of his day to day activities.  He enjoyed traveling to many parts of the world on multiple cruises and his last trip was a tour of China. Ron enjoyed photography and took many pictures during these trips; and of family events over the years.   Ron spent many years deer hunting with his Midland friends in Wyoming and later with his friends in Lake Crystal.  He was a successful hunter and rarely came home without a deer. While in Moose Lake his love of flight led him to obtain his pilot’s license.  He spent many years wintering in Arizona with Sandy and was often visited by their children and grandchildren where they spent many hours playing cards or Mexican Train dominos.  While in Arizona, he was involved in many activities including; hiking, playing bridge and volunteering for many years as a participant of the Chapel Sound team.  Ron loved his wife, sons, grandchildren and great grandchildren. He was always ready to measure the grandkids growth on his Grandpa Sticks and was never without M&Ms for them wherever they would meet.

Ron was preceded in death by his parents, his in-laws John and Regina (Konitzer) Brown, brother Daniel Held and brothers-in-law Donald Brown and Bill Gates.

To order memorial trees or send flowers to the family in memory of Ronald William Held, please visit our flower store.