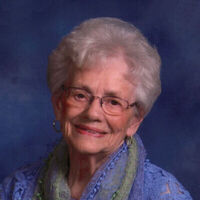 Ruth was born on Flag Day, June 14, 1924 to Clayton and Blanche (Grief) Rader in N. Canton, Ohio.  She proudly stated she was raised a Buckeye.

After completing two years of business school, she held billing and payroll positions where she learned to run a comptometer.  (calculators and computers took their place.)

She met her husband, Lee, before leaving high school and since he was in the Navy they didn’t marry until 1946 at New London, Connecticut Naval base.

As a young family, they moved to Mankato in 1958 and Ruth eventually worked for Federal Land Bank, Dr. Swizzler, Boy Scouts and AJ Busch while raising her girls with Lee until his passing in 1971.

After retiring, she and her second husband, Wally, moved to Northern Minnesota where she spent 30 years referring it to God’s country and attending the Crosslake Log Church. After the passing of her third husband, Warren, she moved back to Mankato in 2015 being closer to family.  She took great satisfaction working as a 15-year volunteer at the food shelf and with church activities in Crosslake.  Ruth enjoyed her grandchildren, participating in Bible study, watching baseball and basketball, needle point, knitting, 1940’s era music, being outside with nature, gardening, baking, antiques, birds and animals.  She remained very sharp yet at 96 playing cards, Rummikub, games and socializing at Old Main Village. Ruth had a dog companion most of her life and an eye to decorating endeavors and hosting guests.  She took pride having a great-grandchild born on her June 14th birthday.

Special thank you to the nursing staff at Pathstone for Ruth’s loving care and her wonderful nurse, Brittany who was so dear to her.  Also, Drs. Kanwar and Putzier for their care and Pastor Libby for her faith filled guidance.

A celebration of Ruth’s life will be held at 11 AM, March 26, 2021 at Northview-North Mankato Mortuary, 2060 Commerce Drive, in N. Mankato with visitation one hour prior to the service.  Burial will be at Glenwood Cemetery in Mankato.

In memory of Ruth, memorials may be given to ECHO Food Shelf, BENCHS in Mankato or Crossview Covenant Church of N. Mankato.

To order memorial trees or send flowers to the family in memory of Ruth Morrison Mara, please visit our flower store.