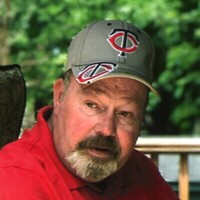 In lieu of flowers, memorials are preferred to the American Diabetes Association, American Lung Association, or the Disabled American Veterans.

Scott was born June 19, 1953 in Mankato to Barney and Ruth (Coan) Rivers and graduated from Loyola High School in 1971. He served in the US Navy for 23 years and retired as a Senior Chief, ICCS(AW). While stationed in Bermuda, Scott was introduced to Karla Olson, and they were united in marriage on December 30, 1995 in Taylors Falls, MN.

Scott worked as a broadcast engineer during his time in the military and retired from Iowa Public Radio as Director of Network Operations. He was an avid Minnesota Twins and Vikings fan and enjoyed collecting sports memorabilia. Scott also loved the simple things, like an ice cold beer or margarita, having the biggest and best electronics, and watching Big Bang Theory and Blue Bloods. He was passionate about the US Navy and was a dedicated war veteran. He will be greatly missed by his family.

He was preceded in death by his parents; granddaughter, Ashley; and sister, Barb Dirckx.

The family would like to express sincere gratitude to the medical staff at Allina Hospital and Clinics and to his daughter-in-law, Jessica Rivers, RN for their special care.

To order memorial trees or send flowers to the family in memory of Scott Rivers, please visit our flower store.