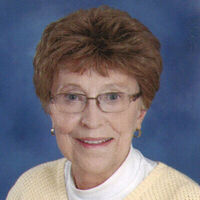 Sharon was born August 2, 1941 to Lester and Evelyn (Gibbs) Marquardt in Clarkfield, Minnesota. She graduated from Wabasso High School in 1959. While in school, she enjoyed being a cheerleader and was voted the homecoming queen during her senior year. Following high school, she attended Mankato Beauty Academy. On June 4, 1961, Sharon married Richard Haman at St. John’s Lutheran Church in Mapleton. After their marriage, they lived in Oakland, California before moving to North Mankato. Together, they raised two children, Richard “Rick” and Mark.

Over the years, Sharon worked a variety of jobs, most notably at Carlson Craft for 20 years and was also a stay-at-home mom. In her free time, she enjoyed reading, keeping up with current events, thrifting, helping at church, trips to the lake cabin on 3rd Crow Wing Lake near Nevis, Minnesota, and especially spending time with her grandchildren.

She was preceded in death by her parents; husband, Richard in 2012; and sister, Darlene (Calvin) Johnson.

To order memorial trees or send flowers to the family in memory of Sharon L. Haman, please visit our flower store.