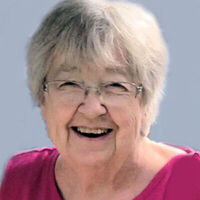 Sherry Ann Kraft was a beloved wife, mom, grandma, sister and friend.  She left this world peacefully, surrounded by family, on April 12, 2022 at the age of 81.

Sherry was born to James and Nancy (McCarthy) Kiffe on January 24, 1941, in Mankato, Minnesota. In 1963, she received a degree in Library Science from Mankato State College.  While there, she met the love of her life, Daniel Kraft, whom she married on August 8, 1964 at St. Joseph The Worker Catholic Church in Mankato.

Sherry’s early career included work as a Mankato Bookmobile Librarian and teaching 5th grade at Holy Trinity Catholic School in New Ulm.  A couple of years into their marriage, Dan and Sherry moved to Mapleton, Minnesota, where Sherry worked part-time as a librarian at the Mapleton Public Library.  When she wasn’t working full-time, she was a stay-at-home mom to her three daughters:  Kristen, Michaela and Danna.

As her daughters became older, she returned to the workforce as a librarian, substitute teacher, and teacher’s aide for the Mapleton and Maple River Public School System until she retired in 2011.

Sherry was incredibly artistic, loved a good British comedy or mystery, spent countless hours on her word puzzles and LOVED snuggling with her 3 dachshunds and Walter the cat.  Her family was her greatest passion.  Sherry loved to travel, but she always wanted her family along with her for the adventure.  They traveled together within the US, UK and Europe.  In 2017, she was able to travel with her entire Kraft clan to Ireland, where Sherry, Dan and the family were able to explore their Irish heritage.  Sherry enjoyed reminding Dan that her 53% Irish ancestry was almost double his 32%.

Sherry will be greatly missed by all who loved her.

Memorial donations can be sent to the Mapleton Fire Department, in appreciation to the first responders for their immediate attention and aid for Mom.

To order memorial trees or send flowers to the family in memory of Sherry Ann Kraft, please visit our flower store.