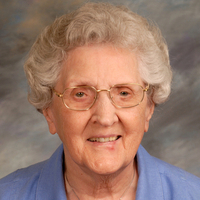 You are my shepherd, O God;There is nothing I shall want.”   Psalm 23

Our beloved Sister M. Andrea Zelenak, 90, died peacefully at 7:00 p.m. on July 4, 2020, in Notre Dame Health Care, Our Lady of Good Counsel, Mankato, Minnesota. Sisters had been keeping vigil with her in the days prior to her death.  Family members felt badly that they were unable to be with her in her last days because of the pandemic restrictions.

The Funeral Liturgy for Sister Andrea will be held Thursday, September 3, 2020, at 10:30 a.m. followed by the burial of her cremains in the Good Counsel Cemetery. Only immediate family members will be able to attend the Liturgy. A prayer service with sharing of memories was held on July 29.   We extend our sympathy to Sister Andrea’s nieces and nephews and their families, her friends, colleagues and former students, and her sisters in community, the School Sisters of Notre Dame and SSND Associates.  She was preceded in death by her parents, Andrew and Mary (Varesinski) Zelenak, her sisters Ann Flannery and Mary Zelenak, and a brother Andrew.

In her autobiography, Sister Andrea wrote: “On September 20, 1929, I, a thirteen-pound baby, was born to Mr. and Mrs. Andrew Zelenak in Minneapolis.  I lived there with my parents and two older sisters and a brother.  I say “older” because I was born eighteen years after my oldest sister and fifteen years after the twins, a sister and brother.”  Her parents and oldest sister were born of Slovak descent in what was then Austria-Hungary.  She was baptized Dorothy Geraldine at the Church of St. Cyril in Minneapolis. Dorothy’s older siblings were very protective of her, and it was through her brother that she became interested in sports. In 1935, Dorothy started first grade at St. Anthony School, where she was taught by the Sisters of St. Joseph (CSJ).  As a third grader, she transferred to SS. Cyril and Methodius School, where School Sisters of Notre Dame were her teachers.  As a ninth grader, she returned to St. Anthony for high school.

Sister Andrea described her call to SSND: “An indication of a religious vocation first occurred when I was eight years old and in the third grade, when I wanted to be ‘just like sister.’ My teacher was from our parish and I had heard many lovely things about her, and about all sisters in general.  Many of these things I was determined to imitate, but the big aspiration was to be a School Sister of Notre Dame.”  During her high school years, she ran errands for the SSNDs and was accompanied by a neighbor, Lois Gilbert (the future Sister Lois Gilbert, SSND).  Lois attended St. Anthony for her entire elementary and secondary education and met SSNDs through her friendship with Dorothy.  Following high school graduation, in August 1947, both Dorothy and Lois entered the SSND candidature.

Dorothy spent her first year in the candidature taking college classes.  As a second year candidate, she taught 60 students in grades three and four at Sacred Heart School, St. Paul.  She returned to Sacred Heart for a second year of teaching, and was received into the novitiate in July 1950.  She was given the name Mary Andrea in memory of her father who had died the previous October.  She professed first vows on July 15, 1951, and began her ministry in Catholic school education at Sacred Heart, Heron Lake. She found life challenging, for though the students were “very dear,” the SSND Community was without a home service sister and Sister Andrea was required to help with the cooking, where she had no previous experience, and the laundry.  Coming from Minneapolis, she also found life in a small town very difficult.  In 1953 she moved to St. Mark’s, Shakopee, and after two years, to St. Peter, Hokah. Beginning in 1956, she taught fifth grade at Holy Rosary, North Mankato, for two years and then advanced to seventh grade, where she again taught the students who were in her first class at Holy Rosary.   She also taught at St. Matthew, St. Paul; SS. Peter & Paul, Mankato; St. Agnes, St. Paul; St. Peter, Mendota; and Providence/St. John Vianney School, South St. Paul.  She served as administrator at both St. Peter and Providence/ St. John Vianney in addition to teaching. When, after eighteen years of service, Sister Andrea left South St. Paul in 1989, she was recognized for her dedication to students, staff and families.  She earned a bachelor’s degree in education from Mount Mary College in 1960 and a master’s degree in administration from Loras College, Dubuque, Iowa, in 1971.  She also earned Clinical Pastoral Education (CPE) certification in 1989.

Following a sabbatical year, Sister Andrea ventured into a new ministry in 1990 when she became a pastoral minister and volunteer coordinator at Corpus Christi Parish in St. Paul.  Her job description was all-encompassing, covering home, nursing home and hospital visits; working with the parish Social Justice Committee to oversee various programs like Loaves and Fishes, Sister Parish, Green Tape and Food Donations, funeral lunches and the Legislative Network; facilitating adult education and formation programs; welcoming and registering new parishioners; and coordinating parish volunteers. Sister Andrea ministered at Corpus Christi until 2007.  When she left the parish, the pastor wrote to the SSND Mankato Provincial Leader: “I thank you and the School Sisters of Notre Dame for the superb, long-term ministry and presence of Sister Andrea Zelenak, SSND.  She has been here at the Church of Corpus Christi for much longer than I have.  Yet I have continually witnessed in her work and life – and consistently heard from parishioners – how much dedication she has to her work, God’s people and Our Lord.”

Beginning in 2007 and continuing until she retired at Good Counsel in 2017, Sister Andrea served as a pastoral volunteer, first at St. John Hospital and then at St. Cecilia Parish, both in St. Paul.  She returned to Corpus Christi for her last four years of ministry.  During her years in ministry, she actively participated in both province committees (Principals’ Association, Health and Wellness, Vocation) and archdiocesan committees (Principals’ Association, Association of Pastoral Ministry, Social Justice).  As memorable experiences, she listed her Jubilee program in Rome with her additional travel to Slovakia (1976) and her participation in the summer experience in Kyoto, Japan (1995).  She wrote a very detailed chronicle of her experiences in Japan.

Sister Andrea’s funeral liturgy plan includes a statement that summarizes her SSND life: “During my entire professional life I have been dedicated to students, staff, the sick, dying and families.  Jesus, the Good Shepherd has been my inspiration, support and guide.”  May Sister Andrea now fully experience life with Jesus, her Shepherd.

To order memorial trees or send flowers to the family in memory of Sister Andrea M. Zelenak, SSND, please visit our flower store.