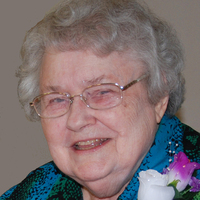 Our beloved Sister M. Bernelle Taube died unexpectedly at 5:20 a.m. on Friday, April 29, 2022 in Mayo Clinic Health Care System Hospital, Mankato, Minnesota.  She had been taken to the hospital late the previous evening.  Two sisters were able to be with her through the night in the hospital.  (Coincidentally, her sister, Mary, died on the same day in 2019.)

The Funeral Mass for Sister Bernelle will be held at 10:30 a.m., Wednesday, May 4, 2022, in the Good Counsel Chapel, Mankato, Minnesota, with Father Joe Fogal as presider. A 9:00 prayer service will precede the funeral.  Burial will follow in the Good Counsel cemetery. We extend our sympathy to Sister Bernelle’s brother, Brother Bernard Taube, SCJ, her nieces and nephews and their families, her colleagues and former students, her many friends, and her sisters in community, the School Sisters of Notre Dame and SSND Associates. She was preceded in death by her parents, Henry and Gertrude (Tutewohl) Taube, two sisters, Mary Beissel and Agnes Knipe, and an infant brother who died at birth.

Sister Bernelle was born in Cannon Falls, Minnesota, on June 2, 1931.  She was the second child in the family of Henry and Gertrude Taube, but because an older brother had died at birth, she was considered the oldest child.  On June 21, she was baptized Cecilia Gertrude at St. Mary’s Church, New Trier.  Two sisters and a brother would later complete the family.  As the children grew older, they helped with the operation of the family farm, caring for pigs, cows, horses, ducks, chickens and rabbits.  A large garden provided food for the family and work for the children.  Nightly and table prayers were part of the family life.

In 1937, Cecilia started first grade at a small country school near their farm. She also attended this school as a fourth grader.  The remaining elementary school years were spent at St. Mary’s School, New Trier, where she was taught by the School Sisters of Notre Dame.  As a seventh grader, she admired her teacher, Sister Felicitas Blaeser, and hoped to be like her.  However, as an eighth grader this desire faded to the point where, as she later recalled, when given a vocation prayer card by her teacher, “I thought if I prayed the prayer, I would surely have a vocation, so I took it home and threw it in the stove.”  Another turn in her vocation story happened while Cecilia was freshman at Hastings High School.  A teacher gave an assignment for the next day: students were to tell the class what occupation they planned for their lives. Sister Bernelle later wrote, “That was a turning point in my life.  After a restless night, I felt the struggle, ‘Should I be a sister?’  When my turn came, I thought the class might laugh at my choice, so I said, ‘I don’t know.’  The teacher said quite sternly, ‘Well, you better find out pretty soon.’  That stirred my soul.”  Cecilia visited the sisters in New Trier for help and advice, and they helped her enroll the next school year as an aspirant at Good Counsel Academy.  She completed her final three years at Good Counsel, graduating in 1950.

Cecilia’s father developed leukemia in the spring of her senior year, causing her to think seriously about not returning as a candidate.  However his health improved and she did enter the candidature in the fall of 1950.  When her father died in March 1951, she considered leaving the candidature, but chose to stay.  As a second year candidate, she taught grades one and two at St. Peter School, Hokah.  At her reception into the novitiate on July 18, 1952, she was given the name Mary Bernelle, a companion name to her brother, John Henry, who became Brother Bernard in the Sacred Heart Congregation.

Sister Bernelle professed first vows on July 19, 1953, and began a life-long teaching ministry focusing on primary grade children. She returned to St. Peter, Hokah, staying there until 1959.  She wrote, “The highlight of each year was the preparation of a class of youngsters for their First Holy Communion. Both the children and I lived for this big day.”  Throughout her teaching years, Sister Bernelle continued to prioritize sacramental preparation of young children.  Other Minnesota schools and parishes that benefitted from Sister Bernelle’s expertise included St. Michael, Prior Lake (1959-65); St. John the Baptist, Mankato (1965-66); St. Dominic, Northfield (1966-72 and 2005-17); Crucifixion, La Crescent (1972-77); St. John the Baptist, Vermillion (1979-93); Our Lady of the Prairie, Belle Plaine (1993-97); and St. Joseph, Red Wing (1997-2005). In 1964, she completed her bachelor’s degree from Mount Mary College, Milwaukee.

At each school and parish where she served, Sister Bernelle invested herself fully in school and parish life.  As a result, she developed a strong network of friends, colleagues, and devoted former students. At Prior Lake, she and four other sisters opened the school.  As was sometimes the case when schools were new, not everything was in place when school started.  Sister Bernelle wrote, “New school – no books – no desks.” She had 24 fist graders the first year and 54 the next year!  When she left La Crescent in 1977, she received a farewell scroll that alluded to one of her “on-the-side” ministries, religious education, especially for the very young.  The scroll read in part: “All preschoolers learned to know and love her well and sparkle when they talk of Sunday School and Sister Bernelle.”  The scroll also summed up Sister Bernelle’s service, not only in La Cresecent, but in all of her parishes and schools: “By her generous ways she’s showed us all how to give, and by her total person has showed us how to live.”

Sister Bernelle began her years in Vermillion as a teacher of first grade.  She commented that the first year she was there, very few people attended the Thanksgiving Day Liturgy.  The next year, her first graders dressed in Thanksgiving-themed attire and carried a gift of food in procession.  The church was filled.  In 1984, she became principal as well as first-grade teacher.  This allowed her to take responsibility for the direction of the school. Reading mastery for each student was important to her and she stressed this with the faculty as well.  She was featured in several local newspaper articles, one of which began with: “The first thing that strikes you when you sit down to have conversation with Sister Bernelle is that she is such a gosh darn nice person.”  As principal of a small school, she took the lead in many school and non-school activities.  She was able to obtain donations of school supplies from individuals, organizations and businesses.  She took “collecting” to the highest degree, using labels, box tops and UPCs to acquire school materials. She worked to keep the school updated by researching current educational trends.  And outside of school, she was very active in SOAR (Stop Our Airport Relocation), a group that was formed when the Metropolitan Airport Commission was considering building a new airport in the Vermillion area.

Sister Bernelle continued her investment in school and parish life at Red Wing as well.  In 2013, one of her former students was featured in a “Salute to Seniors” section in The Catholic Spirit.  In answer to a question about who was a spiritual role model, the senior responded, “My second-grade teacher, Sister Bernelle Taube, prepared me for my First Communion and has always kept in touch with me even when she moved away. She always sends me notes of encouragement and reminds me that she is praying for me.”  Sister Bernelle concluded her school and parish ministry in Northfield, where she was a substitute teacher and parish visitor. She joined the foster grandparent program. She commented about her days in Northfield, “I went to school at 8:00 and came home at 3:00.  I did every job that needed to be done and I used my teaching skills.”

In 2017, Sister Bernelle retired and moved to Good Counsel. She continued her ministry of outreach through letters, visits and phone calls. Knowing that sisters prayed for special intentions, many of her contacts reached out to her with requests for prayer.  She shared her interest in family history with her nieces and nephews and enjoyed visits from her family.

May Sister Bernelle, who heard and answered the call of Jesus, and in turn shared that calling with so many others, now be rejoicing eternally in heavenly joy and peace.

To order memorial trees or send flowers to the family in memory of Sister Bernelle Taube, SSND, please visit our flower store.