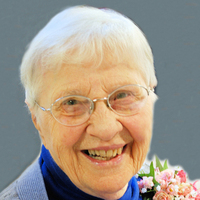 After several days of patient waiting, our beloved Sister Beth Haltiner, 97, died peacefully on April 17, 2021, in Notre Dame Health Care, Our Lady of Good Counsel, Mankato, Minnesota. At the time of her death, she was the second oldest sister living on Good Counsel Hill.

The Funeral Liturgy for Sister Beth, with Father Gene Stenzel as presider, will be held Tuesday, May 4, 2021, at 10:30 a.m., followed by burial of her cremains in the Good Counsel Cemetery.  A Prayer of Remembrance will be held Tuesday morning at 9:00 a.m. We extend our sympathy to Sister Beth’s nieces and nephews and their families, her colleagues and former students, and her sisters in community, the School Sisters of Notre Dame and SSND Associates. She was preceded in death by her parents, Conrad and Elizabeth (Gardner) Haltiner, her sisters Catherine, Bertha, and Mary, and her brothers Conrad, John, Frank, George, Robert and Anthony (who died as an infant).

The youngest of ten children of immigrants Conrad Haltiner (Switzerland) and Elizabeth Gardner Haltiner (Hungary), Sister Beth was born on October 17, 1923, in St. Paul.  About a month later, her father carried her to Sacred Heart Church for her baptism and named his daughter Elizabeth Ann (shortened to Betty Ann) after his wife.  Unfortunately for the family, Elizabeth Haltiner died in May 1925.  The older children stepped up to help their father with the younger ones.  Sister Beth wrote in her autobiography: “There never was an overflow of wealth in our home; as a matter of fact, it was always a battle just to keep going, yet we were always a happy family.”  She continued, “My brother, Bob, before he reached the stage of disdain for young sisters, took me occasionally to church or school.  I’d come home and tell my dad, ‘I’m going to be a sister when I’m big.’ ”

In 1929, Betty Ann entered Sacred Heart School as a first grader, where she was taught by School Sisters of Notre Dame.  She was thrilled to receive her First Holy Communion in May 1931.  Describing her early call to SSND, she wrote: “It seemed as though every sister delighted in asking how many of her pupils were going to be priests and sisters.  And, of course, in the lower grades, everybody in the room would madly wave their hands.”  As she grew older, Betty Ann “passed through the stage when my biggest problem was whether I should be an actress or a sister.”  In eighth grade she was one of a group of girls who learned about the SSND aspiranture in Mankato. She received her father’s permission to attend Good Counsel, but her teachers weren’t so sure.  They thought she would be home after the first week. “But,” she wrote, “I was all enthusiastic and never thought of quitting.”  However, as an older student, she had doubts and would pray, “Please, God, don’t make me be a sister.”  She tried to convince herself that she could do more for God “in the world,” but it didn’t work.  She entered the SSND candidature in 1941, three months after her graduation from Good Counsel Academy.

As a first-year candidate, she took college classes in preparation for being a teacher.  As a second-year candidate, she taught 54 second graders at St. Agnes School, St. Paul, and then returned to Mankato to prepare for entrance into the novitiate.  She commented, “The longed-for, prayed-for, counted-for day came, when on July 21, 1943, I was received as Novice Mary Paul into the Congregation of the School Sisters of Notre Dame.”  She professed first vows one year later and began an almost 25-year teaching ministry.  She taught junior and senior high students at SS. Peter & Paul and St. John, Mankato; St. Stanislaus, Winona; St. Francis de Sales, St. Paul; SS. Peter & Paul, Mantador, North Dakota (where she was also the principal); Notre Dame Academy, Colton, Washington; St. Agnes, St. Paul; Loyola High School, Mankato; and St. Anthony, Lismore (where again, she was also principal).  She wrote about her years of teaching: “I loved teaching, and I loved the students.  I feel blessed because even if the situation was hard, I loved teaching.  I have many good memories of students and was happy in my teaching profession.”  She earned a B.A. from St. Catherine’s College in 1951 and an M.A. in English and theology from Notre Dame University in 1964.

In 1968, Sister Beth’s ministry took a new direction as she became a director of religious education at St. Bonaventure Catechetical Center, Bloomington, and served there until 1973, when she moved to St. Rita Parish in Cottage Grove.  Two events marked 1974 for Sister Beth.  She completed her M.A. degree from the Institute of Pastoral Studies at Loyola University, Chicago, and she asked for a period exclaustration, followed by a release from her religious vows.  In an update to her high school classmates, she later wrote: “My life as a School Sister of Notre Dame has been a happy life, with joys and sorrows, ups and downs.  Though I left the community for three years when I was about 50 years old, I discovered that ‘being a sister – being an SSND’ was part of my bloodstream.  I returned to the community, grateful for my vocation and well satisfied to live out my life within the SSND community.”

When Sister Beth completed her re-entrance into the community, she resumed her religious education ministry, serving at Mary, Mother of the Church, Burnsville (1977-80); Sacred Heart, St. Paul (1980-88); and Sacred Heart, Sauk Rapids (1989-1992). Her main focus was the elementary program, but she served as an adviser to the high school program.  In parishes that had a Catholic school, she was a resource person for the religion teachers. To round out her parish service, she conducted adult education classes, directed the pre-baptism program, visited hurting/grieving families, assisted with liturgy and joined parish committees. When asked to describe what she could bring to a parish, she responded: “I believe that my gifts include enthusiasm for life, love for people of all ages, a desire to minister, openness to the needs of the people I serve, and my belief that the happiness and holiness of each of us is based on knowing and experiencing God’s love for us as unconditional, alive, constant, in every moment of existence.”

During the 1988-89 year she participated in a sabbatical program in Dover, Massachusetts, a very rewarding time for her.  In 1992, she retired from full-time ministry, became a tutor, teaching English to students enrolled in the Guadalupe Area Project in St. Paul, and resided at St. Matthew Convent. She also volunteered at Listening House and Theresa Living Center.

In 1998, Sister Beth moved into full retirement at Good Counsel in Mankato, sharing her gifts with sisters and staff.  She enthusiastically participated in meetings, gatherings and discussions.  Reading was one of her favorite activities (“I have loved reading all my life”) and she joined the Hill book club. She enjoyed needlecrafts – crocheting, knitting, embroidery, and counted cross stitch.  She avidly corresponded with family and friends by phone and letter.  Flowers of any kind were a source of delight for her.

In response to a question about the type of music she enjoyed, she said, “Music to sing to!!”  It’s no wonder then, that the theme she chose for her funeral liturgy is “Forever I will sing the goodness of the Lord.”  May Sister Beth now be a member of the heavenly chorus, singing God’s goodness to all.