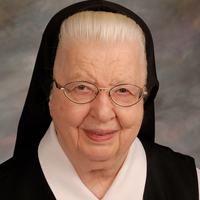 Sister Luella Zollar, SSND, 96, died at 6:15 a.m. on Monday, January 10, 2022, in Notre Dame Health Care, Good Counsel Hill, Mankato, Minnesota. Over the past few weeks she had experienced a gradual decline in health. Sisters from Notre Dame Hall were praying with her in the days preceding her death.

To order memorial trees or send flowers to the family in memory of Sister Luella Zollar, SSND, please visit our flower store.