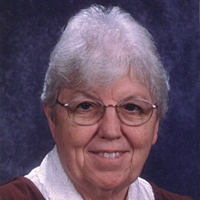 The Funeral Liturgy for Sister Marcene, with Father Gene Stenzel as presider, will be held Saturday, May 1, 2021, at 10:30 a.m., followed by burial of her cremains in the Good Counsel Cemetery.  A Prayer of Remembrance will be held Friday afternoon, April 30. We extend our sympathy to Sister Marcene’s sister, Anna Marie Hagen, her nieces and nephews, her colleagues and former students, and her sisters in community, the School Sisters of Notre Dame and SSND Associates. She was preceded in death by her parents, Cletus and Sylvia (Henrich) Schlosser, a sister, Margaret Ronyak, and a brother Jude, who died at birth.

The second daughter in the family, Sister Marcene was born May 9, 1938, on the family farm near Madison, Minnesota.  Two days later she was baptized Marcene Eva at the Church of St. Michael, Madison. Three years later, Marcene and her older sister, Anna Marie, welcomed Margaret Jean to the family.  In May 1944, their mother died while giving birth to Jude, who was stillborn.  Marcene, who was almost six at that time, later wrote: “I remember the three of us sitting on her bed in the hospital and she talked to each of us.  She told us to be good girls and that she would be living with Jesus, and I thought that was rather neat.”  That summer the family moved to her paternal grandparents’ home, and her father became both mother and father to his three daughters.

Marcene started school at St. Michael in September 1944.  School was a “happy place” for her.  At home, “All four of us would work in the fields, go fishing, and go shopping so that my dad could teach us what we needed to know in life.”  In seventh grade, when Marcene expressed her desire to become a sister, her dad arranged for her to have two eye surgeries to straighten her crossed eyes, knowing that she would not be accepted with major physical limitations.  She entered the aspiranture at Good Counsel Academy in Mankato in the fall of 1952. She commented, “High school years were filled with learning, friends, and being away from home.  Although my dad did not want me to become a sister, he did not refuse me the opportunity to reach my goal.  Also, education was very important to him.”

Following high school graduation in 1956, Marcene entered the SSND candidature in September.  She spent the year taking college courses and learning about SSND life.  On Reception day, July 16, 1957, she wondered if she would be given her first choice of names: Sister Mary Cletus, her dad’s name.  (He had requested that she ask for only such names as he could pronounce and spell.)  Sister Mary Cletus professed her vows in 1958 and continued her education on Good Counsel Hill.  Part of the educational experience was a semester of student teaching first graders at Holy Rosary School in North Mankato.

In August 1959, Sister Marcene began her ministry of teaching primary grade children at Sacred Heart School in St. Paul, where she stayed for seven years.  During this time she gained confidence in her ability to teach young children.  Summers were spent at Good Counsel, attending classes to complete her bachelor’s degree.  She moved to St. Leo School in St. Leo, Minnesota, in 1965, where she taught grades 1 and 2.  She completed her degree in 1968 and was missioned that fall to SS. Peter & Paul School, Mankato, where she worked with multi-aged primary students.  At SS. Peter & Paul, she was asked to pilot the American Book Company reading series.  Team teaching was a popular educational concept at the time, and she became the team leader for five other teachers.  They wrote curricula for several subjects including reading and religion.  She supervised student teachers and also worked with child psychology college students who needed field experience. She stayed at SS. Peter & Paul until 1975.

In 1975 Sister Marcene moved to La Crescent, where she taught second grade at Crucifixion School until 1978.  Her next assignment was St. Michael School, St. Michael, as a teacher of first grade (1978-86).  From there she transferred to Epiphany School in Coon Rapids, and taught first grade (1986-93).  Her classroom ministry was paused for three years when she served as facilities director for Good Counsel Education Center (1993-96).  She spent the 1996-97 school year teaching third grade at St. Wenceslaus School, Dickinson, North Dakota, but returned to Minnesota after that year because she was unable to obtain North Dakota teaching certification.  Sister Marcene’s final teaching assignment was Grade 1 at St. Bartholomew School, Wayzata (1998-2010).

Wherever Sister Marcene shared her love of learning with students, she also made a strong impression on her colleagues.  At SS. Peter & Paul she was recognized for her experience using varied approaches – self-contained, multi-age and teaming – as well as her cooperation, loyalty, flexibility and openness to change, and a strong concern for development of faith community among both students and staff.  Her principal at St. Michael wrote, “She loves children.  They are happy and eager to come to school.  Sister Marcene is sincerely interested in each student.  She has a very positive approach, very loving to children.  She is an excellent teacher of reading.”  A teacher at Epiphany commented, “As a colleague, I believe that Sister Marcene is a ‘Master Teacher.’  The rapport she has with students and parents is outstanding.  She understands the needs of children and is a dedicated teacher who puts in many hours preparing for her students.  Sister Marcene is very creative in the classroom and uses many outside resources to teach and enhance the curriculum.”  Sister Marcene validated that statement in a unique way at St. Wenceslaus, Dickinson.  She and Klara, a child-like puppet and classroom helper, were featured in a full-page article in the Dickinson Press. Her principal at Wayzata succinctly stated, “Sister Marcene was an outstanding educator and reading specialist.  Her educational endeavors were enhanced by her many creative gifts.  Marcene had a love for books and every student she had could read!”

During her three years as facilities director at the Education Center, Sister Marcene was responsible for inventory control, supervised housekeeping staff, and worked closely with Sister Mary Kay Brooks, the hospitality director. She participated in the Ed Center’s programs for young victims of divorce and separation by working with younger children to focus on self-esteem and communication skills.  She also substituted in the Mankato Area Catholic School System. Sister Marcene was also a spiritual director and spent several summers and one full year at the Center for Spiritual Development in Bird Island. Throughout her professional life, she took advantage of many educational opportunities that enhanced both her teaching ministry and her spiritual direction work.

From 2012 through 2016, Sister Marcene was a member of the SSND Postulate Community in Chicago and volunteered in the parish school as an aide in first grade.  She returned to Good Counsel in 2016, and as one of her activities, she volunteered for Mankato’s VINE Faith in Action Literacy Center.  She assisted refugee and immigrant elders with reading and writing skills, enabling participants to be more successful in their new homeland. According to VINE staff, Sister Marcene was a “perfect fit” for this work.  At Good Counsel, Sister Marcene worked individually several days a week with one of the Vietnamese sisters, helping her with English skills.  She was one of the sisters recruited by Sister Mary Donald Miller when the Good Counsel Reading Center was started in 1967, and continued her involvement at different times in the center’s 50 plus years. She herself loved to read and spent free time doing just that.  She also remained close to her two sisters and their families.

Sister Marcene’s theme for her Funeral Liturgy is “God has anointed me.”  The next part of that Scripture text is “to bring glad tidings . . .” In so many ways, through her teaching and care for others, she did bring glad tidings.  May she now enjoy eternal life with the God she served so faithfully here on earth.