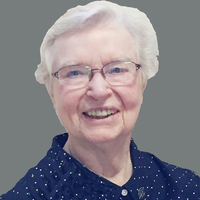 “O Lord, you have given me so much. Please give me one thing more – a grateful heart.” ~ George Herbert Early

In the afternoon of December 21, 2021, our beloved Sister Mary Dominic Klaseus died in Notre Dame Hall, Our Lady of Good Counsel, Mankato, Minnesota. She had experienced declining health in the weeks previous to her death, and sisters were taking turns praying with her in her final days.

We extend our sympathy to Sister Mary Dominic’s sister, Jean (Jack) Burkard, her nieces and nephew and their families, her colleagues and former students, and her sisters in community, the School Sisters of Notre Dame and SSND Associates. She was preceded in death by her parents, Clarence and Agnes (Roerig) Klaseus, and her brother, Dick.

To order memorial trees or send flowers to the family in memory of Sister Mary Dominic Klaseus, SSND, please visit our flower store.