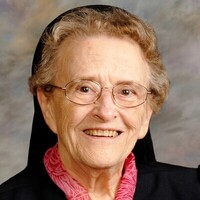 On Monday of Holy Week, April 6, 2020, in the midst of the corona virus pandemic, our beloved Sister Mary Emmanuel Fallenstein, 92, died peacefully at 8:55 p.m. in Notre Dame Health Care, Our Lady of Good Counsel, Mankato, Minnesota. Her condition had declined steadily in the preceding weeks, and sisters were praying with her up to the time of her death. Due to the pandemic restrictions, her family members were unable to be with her.

The Funeral Liturgy for Sister Mary Emmanuel will be held Thursday, August 27, 2020, at 10:30 a.m. followed by the burial of her cremains in the Good Counsel Cemetery. Sister Mary Emmanuel had hoped to donate her body to Mayo Clinic, but because of the pandemic, this could not happen. Only immediate family members will be able to attend the Liturgy. A prayer service with sharing of memories was held on August 5. We extend our sympathy to Sister Mary Emmanuel’s brother Gene and his family, her friends, colleagues and former students, and her sisters in community, the School Sisters of Notre Dame and SSND Associates. She was preceded in death by her parents, Joseph and Arvilla (Joanis) Fallenstein, her brother Joseph and her sister Margaret, who died as a young child.

Sister Mary Emmanuel was born in Mankato on August 16, 1927, and named Mary Elizabeth because of her mother’s strong devotion to the Blessed Mother. Her mother had hoped that Mary would be born on August 15, the feast of the Assumption, but the doctor was happy that she waited because August 16 was his birthday. Sister Emmanuel later wrote, “Mother told me that, as soon as she was able, she took me to our parish church, SS. Peter & Paul, and knelt in front of Our Lady, thanking her for me and giving me to her to care for always.” Mary’s father was a plumber and her mother, in addition to running the household, also helped run the family business. The family home was just across the street from SS. Peter & Paul. Mary entered kindergarten at SS. Peter & Paul in 1932. She loved her teacher, Sister M. Rosella Kruezer, and after one week of school, Mary was sure that she wanted to be a sister. An experience at the end of the school year, when she was dressed in a sister’s habit, strengthened that desire, which stayed strong until about sixth grade, when it began to fade. Following eighth grade graduation in 1941, she attended Good Counsel Academy as a day student. Two of her good friends were the Wilson sisters, Anna Louise and Grace, boarders from the state of Washington. The desire to be a sister was rekindled when Mary was a senior, but it was only during a visit to the Wilsons after graduation that she finalized her decision. Mary entered the SSND candidature in August 1945, and spent one year as a college student. As a second-year candidate, she taught 47 first graders at St. Matthew School, St. Paul. At her reception into the novitiate in 1947, she was given the name Sister Mary Emmanuel. She professed first vows in 1948 and then began a 35-year ministry as a primary grade teacher. Her first assignment was Sacred Heart School, St. Paul. In January of her fourth year there, she was asked to go to another Sacred Heart School, this one in Eden, South Dakota, to teach first and second grades and help with the cooking. She stayed in Eden until June of that year (1952). In August she began a three-year ministry as teacher of grade one at Holy Childhood School, St. Paul. During her first year there, she taught her largest class – 64 students! In her words, “Over the following years I had many wonderful experiences at St. Michael, Morgan [1955-58]; St. Donatus, St. Donatus, Iowa [1958-62]; St. Francis Xavier, Sartell [1962-69]; St. John the Baptist, Savage [1969-75]; and SS. Peter & Paul, Mankato [1975-83].” She earned a bachelor’s degree in education from Mount Mary College in 1958. During these years of teaching, she “loved teaching children how to learn and how to organize and watching them change from little people (kindergarten) to more mature first and second graders. While teaching, I always gave Mary charge of my little ones and only with her help have I in any way had the least success in bringing them to her divine Son.” While teaching at SS. Peter & Paul, Sister Mary Emmanuel also took care of her mother, who was homebound. Also during this time, Sister Mary Emmanuel needed almost a year to recover from cancer surgery and treatment. In 1984, after a sabbatical experience in Chatawa, Mississippi, she became the transportation coordinator and telephone receptionist at Good Counsel, a position she held for five years. She also took a course in nursing assistance, but wasn’t sure when she would use it. In 1989, the Mankato Province opened a pre-retirement house in Hastings. Sister Mary Emmanuel was one of the sisters who helped open this house. Shortly after this, she was hired as a nursing assistant for the assisted living area at Regina Medical Center in Hastings. Sister Mary Emmanuel reflected on her time in Hastings and in Winsted: “I truly enjoyed my work with the elderly. After four years at Regina, I felt called to rural ministry in Winsted, Minnesota. There I served as a part-time pastoral minister to the elderly. God graced me with many blessings as I gave my energy to His elders.” Sister Mary Emmanuel returned to Good Counsel in 1999, provided community service in several areas, and eventually found her niche in the convent sewing room. She mended, sewed buttons, hemmed and altered garments for countless sisters until her retirement in 2016. Before and after her retirement, she could often be found in the chapel, and she especially appreciated being able to go to Good Counsel’s main chapel for Liturgy and private prayer. As a member of the Notre Dame Health Care community she participated fully in community meetings and activities. She maintained a strong interest in the Mankato Catholic School system, attending musical and sporting events as long as she was able. (In 1989, while transportation coordinator, she was featured in a Mankato Free Press article that told how sisters were supporting the Loyola basketball team during the State Basketball Tournament.) With nieces, nephews and grandnephews in the system, her interest spanned generations. She also appreciated her opportunities to travel. She recounted, “Once in the convent, I traveled more than I ever thought I would. In 1973, I lost my suitcase on my Silver Jubilee trip to Rome. The suitcase went around the world.” She also mentioned a retreat in the Holy Land and a trip to Alaska as memorable travel experiences. An avid card-player, she relished the chance for a game of cards, and especially enjoyed games with her brother, Gene, over these last years. May Sister Mary Emmanuel now know the fullness of joy as she experiences life with the God who called her to be his own.

To order memorial trees or send flowers to the family in memory of Sister Mary Emmanuel Fallenstein, SSND, please visit our flower store.