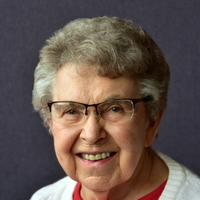 Sister Mary Immaculate Hecker, 95, died peacefully at 10:22 p.m. on August 25, 2022, in Notre Dame Health Care, Our Lady of Good Counsel, Mankato, Minnesota. Sisters were staying and praying with her until the time of her death.

The Funeral Mass for Sister Mary will be 10:30 a.m., Friday, September 2, 2022, at the Good Counsel Chapel with Father Eugene Stenzel as presider. A Prayer of Remembrance will be at 9 a.m. Masks are required for those who attend the service. Her cremains will be buried in the Good Counsel Cemetery.

She is survived by two sisters, Cecilia Stroh and Lorraine Habiger, many nieces and nephews and her sisters in community, the School Sisters of Notre Dame and SSND Associates. She was preceded in death by her parents, Liberatus and Anna Marie (Faller) Hecker, her five brothers, Frank, Joseph, George, Albert, and Peter, and five sisters, Rose Michalski, Christine Koch, Theresa Marx, Margaret Reynolds, and Marian Schaff.

On June 7, 1927, Eva Hecker, the tenth of thirteen children, was born on a farm near Fairfield, North Dakota. Her father, Liberatus Hecker, had come to America from his birthplace in Russia and lived near Dickinson, North Dakota. Her mother, Anna Marie Faller, lived in Dickinson. After they were married in 1911, they eventually moved to their farm near Fairfield. Eva was baptized at Immaculate Conception Church in Fairfield on June 22, 1927.

When she was six, Eva’s school days began in a small country school near her home. The next seven years, she attended the public school in Fairfield. After eighth grade graduation, she stayed home for one year, but then decided to attend high school classes at St. Pius in Schefield, North Dakota, where she boarded with the sisters. Hearing the sisters at prayer, she considered becoming one of them. After completing her high school education at St. Mary’s in New England, North Dakota, she entered the SSND candidature in August 1945 to prepare for religious life. The next year, Eva taught first grade at Sacred Heart School in St. Paul. On July 16, 1947, she was received into the congregation and given the name Sister Mary Immaculate. (Later she was known as Sister Mary.) She professed her vows on July17, 1948, and was sent to St. Matthew in St. Paul where she taught fourth grade and continued her education at Diocesan Teachers College (1948-1950). She then taught intermediate and upper grades at St. Pius, Schefield, North Dakota (1950-1953); St. Wenceslaus, Dickinson, North Dakota (1953-1955); St. Matthew, St. Paul (1955-1960); St. Benedict, Strasburg, North Dakota (1960-1961) and St. Mary’s, New Trier (1961-1966).

Sister Mary then served as residence moderator at Good Counsel Academy in Mankato (1971-1972), after which she moved to Winona where she served in the guest and housekeeping departments at Immaculate Heart of Mary Seminary (1972-1974). Nursing had always appealed to her and, beginning in 1974, she attended Rochester Community College where she studied nursing and graduated as a Registered Nurse with an Associate Degree in Arts in 1977. This was followed by six years as a nurse or nurse supervisor at Regina Memorial Hospital in Hastings (1977-1979 and 1980-1983) and St. Joseph Health Care at Good Counsel in Mankato (1979-1980).

After an SSND renewal program in 1983, Sister Mary was invited to join a small group of sisters in Appalachia. In her own words, “I felt God leading and embarked on a journey.” This journey of 29 years began when she accepted a nursing position at Buchanan General Hospital in Grundy, Virginia (1983-2000), but community outreach took on increasing significance as she served in the far western counties of Virginia.

In 1989, Sister Mary initiated Women Empowering Women, an organization that offered the services needed to improve women’s lives, particularly those of low-income groups in remote areas where isolation, lack of opportunities and support hamper wholesome development and effective living.

In a letter written in 1993, ten years after her arrival in Appalachia, Sister Mary wrote: “My life in Virginia is a multi-focused ministry, which has decreased in direct service and increased in efforts toward systemic change. Participation in an emergency food bank, listening to and encouraging individuals, especially women, and driving in the field to assess housing repair needs of applicants for that service are my chief direct-service activities. It has been very rewarding to see the effects – like persons who have been assisted with housing in turn volunteering to help others, or women who felt trapped in their homes move on toward college or GED education and make positive changes in their lives. . . .

“Other activities I have ‘fallen into’ chiefly by invitation include membership on the board of directors for a shelter for abused women, membership on the Buchanan County Client-Centered Advisory Council – a sort of local legal-aid eyes and ears and voice for the poor, and CASA (Court Appointed Special Advocate) that helps children caught in the court system because of abuse or neglect.”

Sister Mary was also a board member of the Family Crisis Support Services, of Hope House, a shelter for abused women in the area, and of Buchanan Neighbors United, which hosted volunteer groups for home repair. She volunteered at the Buchanan Country Domestic Violence Shelter, was a member of the Grundy Women’s Club, and often organized seminars and workshops related to personal growth and domestic violence issues.

After retiring from nursing in 2000, Sister Mary dedicated herself completely to reaching out to the people she met, first in Mavisdale, Virginia (2000-2001), and then in Hurley, Virginia (2002-2012). During a disastrous flood in 2002 Sister Mary helped provide emergency family care. She was active in supporting health care and was instrumental in bringing a medical clinic to Hurley. Since she had promoted the goals of the Buchanan County Chamber of Commerce, she was presented their annual volunteer award in 2006.

Sister Mary returned to Good Counsel in 2012 but continued her Appalachian ministry through prayer for the people of Buchanan County. The gracious, kind, and positive manner that enabled her many years of ministry also characterized her participation in SSND community life at Good Counsel. She was close to her large family and loved to visit with family members and her sisters in community. Throughout her long life, Sister Mary “walked in God’s love” as she journeyed near and far from home but always toward her eternal homeland where she would be united with God and all of God’s loved ones.

To order memorial trees or send flowers to the family in memory of Sister Mary Immaculate Hecker, SSND, please visit our flower store.