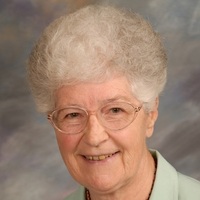 “Life is a profound, mysterious, sacred and joyful dance.” Our beloved Sister Rosemary (George Ann) Schuneman began her autobiography with those words. During the early morning hours of Thanksgiving Day, November 25, 2021, Sister Rosemary completed her dance, when she died unexpectedly at her St. Paul home.

The Funeral Mass for Sister Rosemary will be held at 10:30 a.m., December 3, 2021, in the Good Counsel Chapel, Mankato, Minnesota, with Father John Kunz as presider. A 9:00 prayer service will precede the funeral.  Burial will follow in the Good Counsel cemetery. We extend our sympathy to Sister Rosemary’s sister, Shirley Moeschter, her nieces and nephews and their families, her colleagues, former students and dance group members, and her sisters in community, the School Sisters of Notre Dame and SSND Associates. She was preceded in death by her parents, George and Marie (Roehl) Schuneman, and her brothers, George and Nick.

On December 6, 1938, Sister Rosemary began her dance of life in St. Paul.  She wrote, “The nurse brought me to my mother and exclaimed that this new baby girl was one day going to be very special, or do something special in her lifetime.”  She was baptized Rosemary Catherine about a month later at St. Agnes Church.  The second oldest and first daughter of four Schuneman children, she remembered “being a happy, mischievous girl.” She attended St. Agnes grade school, where she was taught by School Sisters of Notre Dame.  She described her call to SSND, “When I was in 8th grade, I started to think about becoming a sister.  Up to this time, I wanted to be a dancer, singer or an actress.  I took every chance to attend daily Mass and to set aside a special time to pray.  When I was a sophomore at St. Agnes, I talked to our principal and got information about SSND.  At that time, I had a desire to serve minority people. I entered the aspiranture at Good Counsel Academy in Mankato in my junior year.”

Rosemary graduated from Good Counsel in 1956 and entered the SSND postulate that fall. After a year of college classes and preparation for religious life, she was received into the novitiate in July 1957, and given the name Sister George Ann. She later returned to her baptismal name. She professed first vows on July 17, 1958, and resumed teacher preparation courses, including student teaching at Mankato’s newest Catholic School, St. Joseph the Worker, which opened that fall.  This was the beginning of her 17 years as a primary teacher in Minnesota and Iowa.  She taught at St. Joseph, Red Wing; St. John the Baptist, Savage; St. Joseph, Cresco, Iowa; St. Philip, Minneapolis; St. Stanislaus/Project Discovery, St. Paul; and St. Michael, Prior Lake.  She earned a bachelor’s degree from Mount Mary College in 1967 with a major in English and a minor in education.

During her time at St. Philip, she began to reach beyond the classroom.  She wrote, “St. Philip was an inner city parish.  During the summer I volunteered my services to the Northside Community Center.  It was the first time that I had worked with minority people – and I loved it.  I visited older and sick people in the Projects.  I fed invalids and helped people look for jobs.  It was such a good experience for me that I decided to continue some of the work during the school year.  I began to make regular visits to a neighboring rest home and often took my second graders to visit the elderly.”  The next summer, she volunteered to work with migrants in Appleton, Minnesota, another experience that she enjoyed.  While she was teaching at St. Stanislaus, six inner city schools consolidated, providing her with more experience working with minority groups.  In 1972, she moved to Prior Lake, and in addition to her teaching, reached out to the women’s prison in nearby Shakopee.  She became an Amicus for one of the prisoners, and was also a custody volunteer and received training to take women shopping and on recreational trips.  Feeling a call to missionary service, she spent part of one summer in a “most enriching” Third World Seminar and Missiology course in Honduras.

1n 1974, the Mankato Province of the School Sisters of Notre Dame responded to a call for missionaries to serve in the country of Kenya, East Africa, to improve the education of Kenyan sisters and to administer a school in Kisii.  Three sisters initially arrived in August, 1974.  Within a year, letters from those sisters contained the same appeal: “We need help.”  In 1975 another group of three sisters arrived in Kenya in response to that appeal.  Sister Rosemary was one of them. Her primary ministry involved working with native Franciscan Sisters of St. Joseph, teaching English and basic skills to older sisters. She was quoted in a newspaper article: “That was the start of my work with adults.  It is rewarding, especially teaching poor women who have been deprived of education. You changed their lives.”

After four years in Kenya, Sister Rosemary returned to St. Paul in 1979 with a passion to continue teaching English to adults.  Her mother suggested that she do something to help the Vietnamese boat people, who were arriving in St. Paul and other areas of the country. Sister Rosemary applied at the International Institute and worked there for two years until funding for the ESL program was cut.  She began looking for a way to begin her own school.  Coincidentally, businesses in St. Paul were being encouraged to provide jobs for the new immigrants.  A large St. Paul insurance firm, the St. Paul Companies, did not have employment positions, but it did have space, and Sister Rosemary’s Notre Dame ESL School became a reality.  The Oblates of Mary Immaculate (OMI) funded the school for the first year (1982), and the insurance company supplied grants until 1993 when the school was discontinued.  Known as “the company nun,” she taught two shifts – beginning students in the morning and intermediate students in the afternoon.  Most of her students were Asian, with others from Central America and Eastern Europe. One of her focal points was to teach practical English – English that her students would need to apply for and keep jobs, and English for everyday living.  In 1986 Governor Rudy Perpich appointed her to the Governor’s Advisory Council for Refugees. She spent two weeks in September as part of an 11-person delegation that visited refugee camps in Thailand.  Minnesota’s Southeast Asian refugees/immigrants came from those camps and the group wanted to get a better picture of their experiences prior to coming to Minnesota.  Following their return, group members contacted government officials asking them not to cut services for refugees or reduce the number allowed into the country.

After a sabbatical year, Sister Rosemary continued her ESL ministry, teaching Functional Work English classes through the St. Paul School District at the Hubbs Center, in partnership with Jewish Family Services and other agencies.  She invited employment agencies to talk with her classes and to help with practice interviews.  Students were also able to tour work sites.  She again taught students what they would need to know to keep a job – such as being on time, how to handle conflict and how to work with customers.  This ministry continued through 2018.  She received multiple awards for her work and was featured in several newspaper articles.

Along with her commitment to refugees and immigrants, Sister Rosemary developed a strong interest in round and square dancing.  She wrote, “Working with refugees who have many needs and who are grieving their losses is extremely rewarding and sometimes ‘heavy.’  I have found that the gift of dance in my life gives me just what I need to keep a healthy and holy balance in my life. . . . At first I thought no one would want to dance with a nun, but I have been proven wrong.  I’ll have to admit that I made a ‘deal’ with God: I promised that I’d pray for every person I danced with if God would see that I have a partner at the dances. . . . My life has truly been blessed with lots of new friends through square dancing.” Another important aspect of Sister Rosemary’s life has been her journey with cancer. In 1994 she was diagnosed with second stage breast cancer and, in 1998, non-Hodgkin’s lymphoma. She commented, “It has been my gift of dance that has energized me and helped me heal.”

In her retirement Sister Rosemary visited nursing home residents and continued her prison ministry. Her final visits took place the day before she died.

Sister Rosemary praised God through her gift of dance and her gift of teaching.  May the God of dance bless her with heavenly dancing days!

To order memorial trees or send flowers to the family in memory of Sister Rosemary Schuneman, SSND, please visit our flower store.