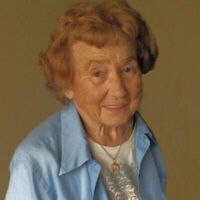 Funeral Mass will be held at 11am, Friday, August 6, 2021 at SS. Peter and Paul Catholic Church with a visitation one hour prior. Burial will follow at Calvary Cemetery, Mankato. Please share a memory of Stella and view her service livestreamed at www.mankatomortuary.com.

Stella, the youngest of seven children, was born June 1, 1930 in Marble Township to Adam and Bernice (Sik) Guza. In her earlier years, she worked as a waitress in Canby and Fairmont. She was united in marriage to Clifford Johnson in 1956 in Wilno, MN. When they moved to Mankato, Stella continued working as a waitress and later worked at Mid-Tech. Stella worked as a custodian at South Central Technical College for over 30 years before retiring in 2016.

Stella and Clifford adopted two children, Randy and Sandy, and made their home in Eagle Lake. She was a longtime member at SS. Peter and Paul Catholic Church in Mankato. Stella had a strong work ethic. She was meticulous and particular and took great pride in caring for her lawn and gardens. Stella was a lifelong cat lover and treasured spending time with family and friends.

To order memorial trees or send flowers to the family in memory of Stella Martha Johnson, please visit our flower store.