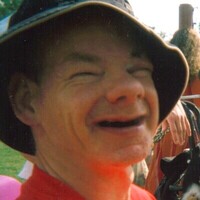 Terry moved to North Mankato, MN in 1983 from Cambridge, MN. He later lived in Mankato, moving back to North Mankato in March of 2020. MRCI was Terry’s employer from 1983 until MRCI was closed due to COVID. Terry divided his time in recent years between MRCI and Lifeworks. At MRCI, Terry was a hard worker who expected the same from those around him. At Lifeworks, Terry was able to express his love of art, music, and especially coffee. You will see several of Terry’s art works on display at his celebration of life.

Terry was a true Renaissance Man. He not only created works of art, but also enjoyed being in the audience of a good musical or great concert. Terry’s world was full of friends from all walks of life and many different backgrounds. Terry was very accepting of others as long as they were honest, caring, and understood that he was not a person to be rushed. Being able to make a good tasting coffee frappe didn’t hurt either to become his friend. Like most of us, Terry’s day started better with coffee.

He was preceded in death by his maternal grandparents, Frank and Mary Altenberg; mother, Leona Morrissey; and brother, John Morrissey.

When Terry passed away, it broke the hearts of us who had the privilege to take care of Terry and still care so deeply for him. We are thankful for the memories he left us and are excited to share these with all who had a bond with Terry through memories, life’s lessons Terry taught us, and how his smile made our days brighter.

Terry is sadly missed and fondly remembered. Please join us as we celebrate his life through our stories, pictures, and songs from 12pm-4pm, Saturday, May 15, 2021 at Northview ~ North Mankato Mortuary with a service starting at 1pm. There will be an open mic for you to share what keeps Terry in your heart. Coffee time will follow the celebration. A conversation table will be set up if you wish to share pictures and mementos. Please share a memory, view his video tribute, or watch his service livestreamed at www.mankatomortuary.com.

To order memorial trees or send flowers to the family in memory of Terry Lee Altenberg, please visit our flower store.