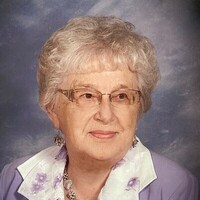 Valeria Ann Thomas Bersaw, 93, of North Mankato, passed away May 18, 2020 at Monarch Meadows in North Mankato.

A private family service will be held with burial at Calvary Cemetery in Mankato. Northview-North Mankato Mortuary is assisting the family.

Valeria was born December 22, 1926 to Orville and Mary (Staudinger) Halverson in Madelia, Minnesota. She grew up in Butternut and later moved to Lake Crystal where she graduated from high school with the class of 1944. After graduation, she attended Mankato Commercial College and worked as a bookkeeper/computer operator at Gamble Robinson Wholesale Co.

On June 9, 1951, she married Robert “Bud” Thomas at Ss. Peter and Paul Catholic Church. After his death in 1988, she worked at Cada House for one year as a bookkeeper. She then worked as a hospitality host for the Mankato Chamber and Convention Bureau for five years. Valeria was a Cub Scout leader, worked with Campfire Girls, and was also a member of the American Legion Auxiliary, Holy Family Society, Blue Earth County Extension, Kalico Klutch Extension, DOES Drove 169, and Ss. Peter and Paul Catholic Church. In her free time, Valeria enjoyed knitting, crafts, reading, playing Bridge and 500.

She was preceded in death by her husbands, Robert and Jerry; and son, Brian.

The family of Valeria would like to thank the staff and directors of Monarch Meadows for the wonderful care and support she received over the past three years.

To order memorial trees or send flowers to the family in memory of Valeria Thomas Bersaw, please visit our flower store.