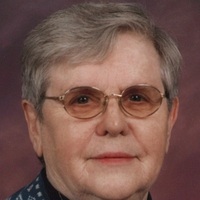 Virginia Mae Midthun, age 92, passed away on Saturday May 9, 2020.  She had been in hospice care at The Beacon in Lake Crystal and passed away comfortably thanks to the excellent care she received at The Beacon.  A private graveside service will be held at Woodland Hills Memorial Park, Mankato.  A Celebration of Life will be held at a later date.  Lake Crystal Mortuary is assisting the family with arrangements.  Memorials are preferred to Zion Lutheran Church, Lake Crystal.

Virginia “Ginny” was born in Rockwell City, IA on May 16, 1927 to Fred and Abbie Yeager.  She was the fourth of eight children.  The family moved to Delavan, MN shortly after Ginny was born and her childhood and school years were spent on the family farm south of Delavan.  She especially liked helping her Dad with farm and field chores.  Given the choice of shocking wheat or baking bread, it was shocking every time.  Although some of her mother’s cooking skills must have rubbed off accidentally because she was an excellent cook herself.  Her boys will attest to that.

Ginny was a very good athlete.  She spent many hours “playing catch” with the boys in the backyard and one learned quickly not to challenge her to ping-pong because she was virtually unbeatable.  She participated in league bowling for many years in Lake Crystal and played softball in a Mankato league in the early 1950”s.  She was very happy when Title 9 laws were passed that opened up athletics for women.  She did regret that women did not have those opportunities when she was younger.  She was especially proud to be able to attend many Gopher softball games where her granddaughter Stephanie was a 4 year starter.  She was also an avid Lake Crystal “Lakers” fan and subsequently a Wellcome Memorial “Knights” fan and would regularly be in attendance at “ball games”.  Any kind of spectator athletics, it didn’t matter.

To order memorial trees or send flowers to the family in memory of Virginia Mae Midthun, please visit our flower store.