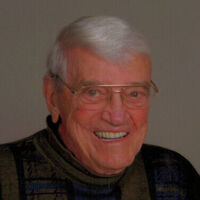 William Joseph “Bill” Fetter, Jr., after 92 years of enthusiastic living, died peacefully May 18, 2021 in Mankato, MN.  Born September 21, 1928, in Kansas City, Missouri, Bill grew up in Kansas City before graduating from Ft. Scott (KS) High School in 1945 at the tender age of 16.  He was the first in his family to attend college, proudly graduating from Kansas State University in milling administration. He set a precedent that his children took note of, taking 8 years to matriculate after high school. His reasons for extending his education were somewhat better than his offspring, involving two tours of duty in the Army, including a posting in Japan after WWII and a couple years at Ft Hood, TX during the Korean War. As a young man, Bill was also the first in his family to own a car, beginning his life-long love of driving cars and traveling throughout the US.

Bill started his first job at Tri State Milling Company in Rapid City, SD in 1953. Shortly after arriving in his new hometown, he met Pat Luhrs, a young nurse recently relocated from Sioux Falls, SD. They were married in 1955, with 4 children appearing on the scene over the next 10 years. In 1971, the family moved to Mankato when Bill accepted a job with Hubbard Milling Company. In 1973, Bill and Pat were involved in opening the first Taco Johns in Minnesota. Over the years, they operated a number of these restaurants across Minnesota before selling out to their long-time business partner.

After retiring in 1993, Bill was able to pursue his passions of golf, bowling, playing cards with friends, and especially spending time with his expanding family. He was a longtime member of the Mankato Golf Club, a supporter of all MN sports teams, but had a special fondness for KSU sports, his alma mater. He was also an active 50-year member of Holy Rosary Church in North Mankato, rarely missing a Sunday Mass.

Bill’s friends and family will miss his positive outlook on life, his wit and humor, his boisterous voice and loud laugh, and his kindness to all. Bill is survived by his wife, Patricia; his daughter, Susan Bryant (Al); his 3 sons, Steven (Gwen), Robert (Peggy), and Daniel (Susan); 12 grandchildren; and 2 great-grandchildren.

Visitation will be held from 5-7:30pm, Thursday, May 27, 2021 at Northview ~ North Mankato Mortuary. Memorial Mass will be 11am, Friday, May 28, 2021 at Holy Rosary Catholic Church in North Mankato with visitation one hour prior. Interment at Fort Snelling National Cemetery in Minneapolis will be scheduled on a later date. In lieu of sending flowers, Bill’s family would appreciate donations in support of the Salvation Army, local food shelves, or a charity of your choice.

To order memorial trees or send flowers to the family in memory of William "Bill" Joseph Fetter, Jr., please visit our flower store.