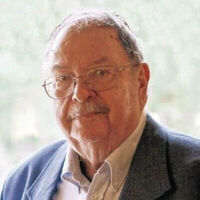 Bill married Elizabeth (Betty) Lee Williams on August 28, 1953, they were married for 66 years, until Betty passed on March 15, 2019. Bill joined Centenary Methodist Church in 1956 where he served on virtually every committee within the church and was Head Usher for many years. He served in the Army from 1956 to 1959, serving as Special Agent with Counterintelligence Corps, covering all of Southern Minnesota. Bill then spent the rest of his career as an owner of Melhorn Mueller Co. in Mankato as an investigator for various insurance companies, district attorney offices and law firms. He did graduate work at Mankato State University and managed the Chain Gang for the Mankato State University football team.  Bill also managed the chain gang for the Minnesota Vikings summer training camp. Bill coached football and baseball for youth teams for many years and was one of the co-founders MAYBA Program. Bill was an assistant coach with the athletic programs at Loyola High School. He served several years on the North Mankato Traffic and Safety Committee under several mayors and with various department heads. Bill served on the original city charter commission that set up the present-day mayor/manager system. Bill was selected for the MAYBA Hall of Fame and also received the Service Award from Mankato State University.

Services will be held at a later date. Mankato Mortuary is assisting the family with arrangements.

To order memorial trees or send flowers to the family in memory of William Eugene Borchardt, please visit our flower store.